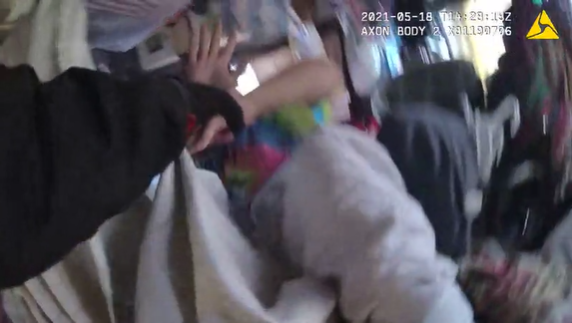 ESPAÑOLA, NM (KRQE) — You may have already seen the viral video on YouTube where a father alleges that a Taos police officer punched him in the nose in front of his children after members of a child abuse task force drugs raided their shuttle on their way home to Espanola.

Angelo Giuffre and his family slept in their shuttle outside a car repair shop in Espanola last May after experiencing engine trouble. A drug task force was raiding the store and making sure there were no suspects in the van. One of Giuffre’s three children is seen in the body camera video, watching the scene unfold.

The camera moves and is blocked so you can’t see what he’s done. After getting off the bus, Giuffre’s wife began filming a cellphone video to document their encounter.

The Taos Police Chief told News 13 that Officer Martinez did not violate any policy with the blows to the face. The Giuffre family say they are considering filing a complaint but so far nothing has been filed.