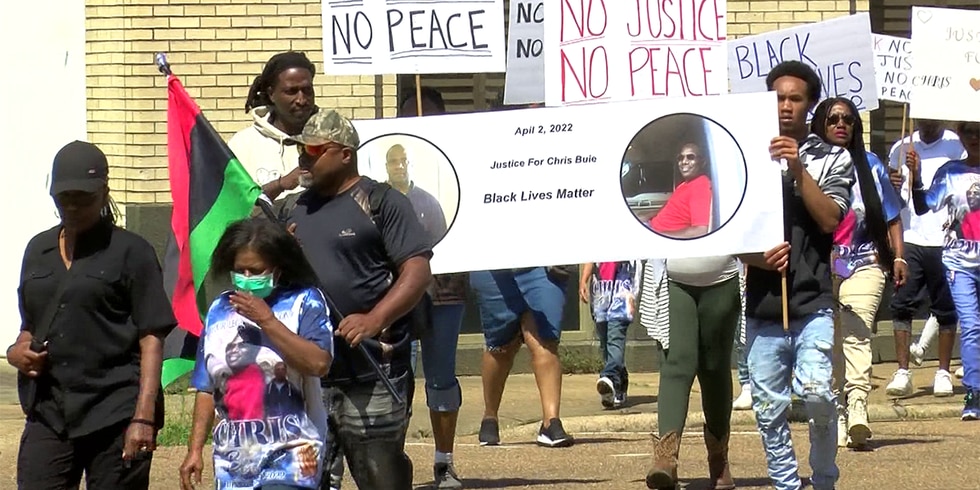 Family and friends protest the death of Christopher Buie in Hazlehurst

HAZLEHURST, Miss. (WLBT) – Frustrated family members gathered on the steps of the Copiah courthouse, demanding justice for Christopher Buie, who was shot and killed in Hazlehurst.

His tragic death leaves some heartbroken and distraught.

“I didn’t go and bite my tongue, but you all lost loved ones to a racist devil,” said civil rights activist Steven Harris.

Dozens of people marched through the streets of downtown Hazelhurst with signs and chants calling for Stanley Eckhoff to be returned to jail.

Eckhoff was arrested and charged with the murder of Christopher Buie, 49, in February. Police say the two men had an argument at Stanley Tire and Auto Shop over repairs to Buie’s vehicle.

It was then that Eckhoff, the store owner, allegedly shot Buie in the neck.

“I want Stanley, or whatever you call him, to rot in jail,” said Christopher Buie’s mother, Anna Buie.

Anna Buie says she is angry with Hazlehurst Police because she was not told the details of her son’s murder case.

However, Hazlehurst Police Chief Darian Murray said some family members were not told the details as he was honoring the wishes of Chris’s wife and children not to do so.

“You kill a dog, you’ll get more time than that dog got for killing my son,” Buie said.

According to Chief Murray, Eckhoff was released on bail and placed under strict house arrest in February.

For now, those close to Buie say they want to keep the fond memories of him alive. Chief Murray says no trial date has been set.