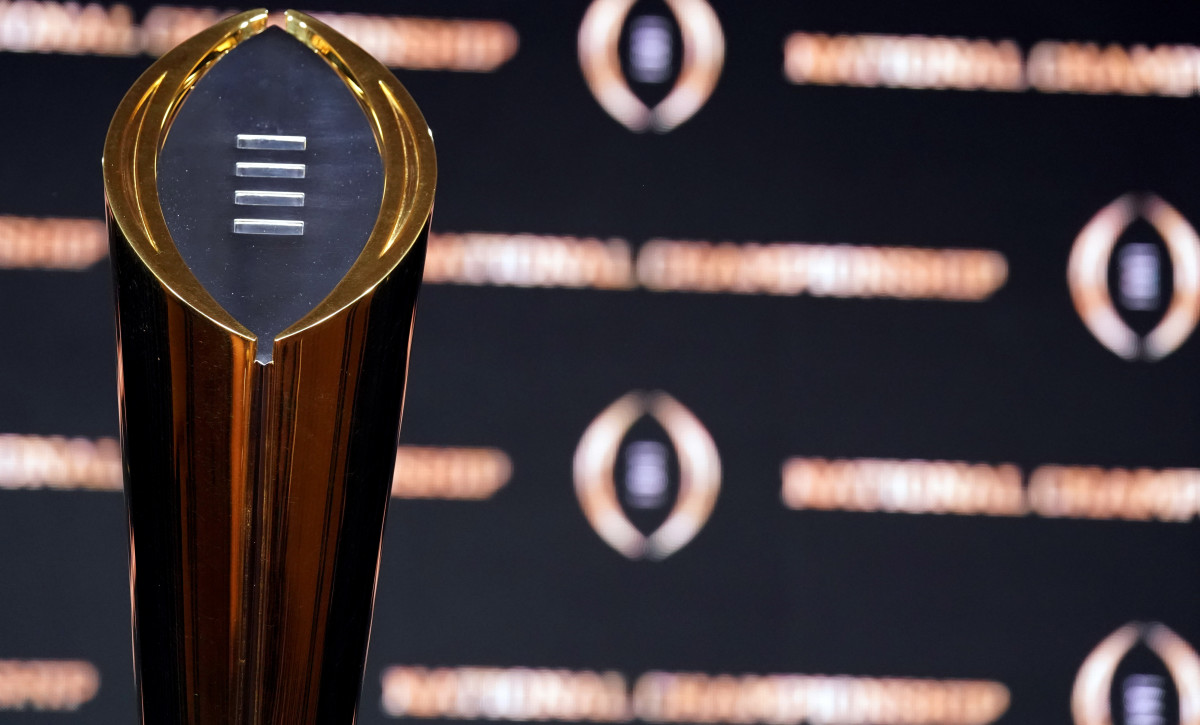 At the end of my colleague Ross Dellenger’s story about setting up the college football qualifying management committee meeting on Wednesday, an anonymous official involved in the proceedings said: “If this all falls apart, we are going to get hammered publicly. ” After they’ve gotten into the expansion for now, I search my toolbox to start the bashing.

The families of the war crime that are the FBS conferences must stop the quarrels, stop the stabbing in the back, stop the postures, stop prostrating in front of the bowls, stop the greed of each person for oneself, stop the myopia, stop obfuscation and overcomplication. On the cusp of an improvement in the playoffs, they backed off. Now they need to come together and get things done for the betterment of the sport as a whole and the fans who pay the freight.

Overcome your rich and sneaky self. Come together and host an extended playoffs sooner, not later. If you can’t, you should all be thrown into Dr Pepper Fansville’s jail by Sheriff Brian Bosworth and forced to watch reruns of UConn games.

In June, a committee appointed to study alternatives to the current four-team model presented a proposal for a 12-team fandango. Overflowing with good ideas (games on campus) and good intentions (inclusion Group of 5) but not without problems (how many games are too many), it has met mostly positive reviews. It was remarkable in an industry that tends to hate the concept of radical change.

In hindsight, it was all too easy. It should have been known, at that point, that those responsible for the worst playoffs in sport would screw him up on his way to delivery. College football is the auto repair shop that is still waiting for parts two weeks after your car was supposed to be ready. We’re left behind, but there’s not much more we can do.

Remember: it only took 145 years to stage a four-team playoff. The Great Pyramid of Giza, built in ancient times, was 20 years of work.

The 11-person management committee had “an excellent meeting” in Dallas, according to Notre Dame athletic director Jack Swarbrick. â€œOne of the best we’ve had,â€ he said, praising the franchise in the play. Others involved agreed. There were certainly a lot of things that needed some nerve-wracking.

It was the first opportunity for all the powerful to come together face to face since the last realignment spasm that rocked the sport. The Southeastern Conference shockingly added Texas and Oklahoma as future members in July was such an aggressive event that it sent everyone back to their foxholes to examine the ramifications and then to come out. with repaired bayonets. There are deep and persistent trust issues here.

Wednesday’s discussion only lasted three hours, so the Festivus Airing of Grievances must have been vetted when it could have lasted for days – the Big 12 vent at the Southeast Conference, the vent American to the Big 12, the Mountain West to the American vent, as the runoff conference raids progress. Most of the time, commissioners have had to discuss the pros and cons of more playoffs and longer playoffs and cold weather football and whether ESPN can continue to monopolize the entire playoffs. playoffs.

And the dumbest consideration of all: the sunset in Southern California.

The Rose Bowl, bless its archaic and arrogant heart, would stand before world peace and a cure for COVID-19 if these things somehow required moving the game on New Years Day at 5 p.m. Eastern time. I’m not anti-sunset – in a vacuum, the golden hour of the Rose Bowl is always one of the best things about bowl season – but allowing it to be the granddaddy of all the flies in the enlarged playoff ointment because it must to be played at a certain time on a certain date is stupidity to slap your forehead. And the conferences that continue to bring water to this game and other bowl interests are complicit in preventing college football from having the best playoffs it can and should have.

If the Rose Bowl asks for its time and date, fine. Let this be one of four New Years’ quarterfinals in a 12-team playoff that has a first round played at campus venues (regardless of the weather). Let the other bowls, if they are to be involved, take the semi-finals. If that’s not enough for the folks at the Rose Bowl, tell them to enjoy their parade and get them out of the playoffs altogether. They can keep company at Duke’s Mayo Bowl and Cheez-It Bowl as part of the ESPN white noise of the holiday lineup.

Of all the people who should recognize this and move on to the biggest playoff role model possible, this is new Pac-12 commissioner George Kliavkoff. A plan that offers 12 playoff slots, including six guaranteed for top-ranked conference champions, is the breath of fresh air its whistling league needs. But Kliavkoff has been slow to come back, with some people involved pointing to him as one of the main sticking points of a 12-team model who doesn’t bow down to the Rose Bowl.

It’s possible that much of the current standoff between warring criminal families is team building, with the end goal of ESPN leveraging its playoff broadcast monopoly. If Fox and / or others are trying to diversify CFP media rights, that’s good for just about everyone. And if everyone can come together after that, fine. â€œWe have a better idea of â€‹â€‹the issues and I think we can fix them,â€ a source said.

While a playoff overtime always looks likely, it’s not imminent. More meetings are scheduled for next week in Chicago, but nothing final will be decided there. It will linger, good ideas and good intentions stuck on a rack in the auto body shop, parts still on order, all of us fuming and waiting for the keys to a better playoff series.

â€¢ High level QB faced with early difficulties
â€¢ Can Cincinnati take the Group of 5 to new heights?
â€¢ Five sets of conference titles new faces could crash
â€¢ What would a group of 12 teams look like after week 3?